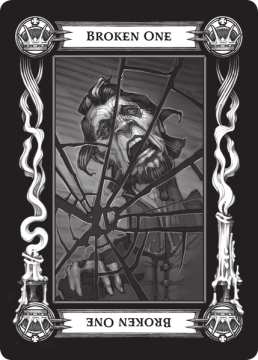 By the time I’ve gotten around to writing this post DDEX4-8 The Broken One has made it to Electrum best seller on the DMs guild. Neat!

I had a lot of fun writing for the Ravenloft setting. I particularly liked exploring the Dark Powers as a kind of meta-narrative device delivering judgments of good and evil directly into the mechanics of the game. I was also able work more closely with the AL writing team to help one adventure flow into the next and keep the setting consistent. Some folks on the team were kind enough to share their original drafts so I could see how they approached the work.

The adventure also works as a one-off horror & mystery story that can be set in any village so if you are interested in checking it out the module is available here. https://www.dmsguild.com/product/182771/DDAL48-The-Broken-One-5e?

As always if anyone has run the module and wants to offer criticism I’m happy to hear it here in the comments.

END_OF_DOCUMENT_TOKEN_TO_BE_REPLACED

By now my humble contribution to the D&D universe has seen a successful reception at Gen-Con, and has been released on the DMs Guild for anyone to purchase and play at home. I am pretty stoked about this.

I’m humbled by the positive reception I’ve seen, in particular I got a great review from The Tome Show. There have also been some critical forum posts out there in the universe that have offered some food for thought.

If you want to use this adventure in your home campaign. Here are a few thoughts and notes on how to modify the adventure to better accomidate whatever style of play suits your campaign.

END_OF_DOCUMENT_TOKEN_TO_BE_REPLACED

UPDATED 4/19: Yeah this campaign arc has been abandoned. I’ve decided to focus on freelance work for the Adventure’s League and DM’s Guild going forward.

They say every published novelist has one or two complete drafts sitting in a shelf somewhere that will never see the light of day. I think of my work on this now-shelved Byzantium based campaign to be a very thorough self-training exercise in writing adventures. I’m glad I spent a year doing encounter push ups and memorizing challenge rating tables because I was ready to hit the ground running when I found open calls for work.

I plan to slice out the most succulent pieces to present as one-off adventures through the DM’s guild. Stay tuned.

The 1st chapter of Shadow of the Axe is ready to download and play! This is a great jumping off point for any campaign as it throws the characters into a goblin ambush and leads them into a confrontation with a dangerous gang of enforces in the imperial capital. All you need to run this is the 5th edition basic rules set.

Here it is:  Chapter 1- Unwelcome Guests

Update: File has been updated on 6/25. Work is covered by a creative commons non-attribution licence.

POST UPDATE: I’ve been accepted to the freelance design team for the Adventurer’s League. WAAAAHAAHHAHAHAHAHAHAH!!!!!!!!

Here is a little two page dungeon and encounter module I wrote as part of my Adventure’s League application. It was designed for five 3rd level players but can easily be scaled up or down as needed. You can also just take the map and dump in your own monsters. There’s also a bit of a puzzle and lots of opportunities to fall from a great height.

If you want to watch your players dodge arrows and cockatrice spines while climbing a bridge made of skeletons then this is the perfect encounter for you.

You’ll need the Monsters Manual for all the monster stats.

This is a different kind of post with some thoughts I’ve struggled with trying to make historical fiction / fantasy  game settings. It deals with a difficult and sensitive topic, so, if this isn’t your thing then scroll along.

There’s something that’s been bothering me recently…

Where do Half-Orcs come from?

The AD&D Manual published in 1978 by Gygax himself describes the playable race thusly:

Orcs are fecund and create many cross-breeds, most of the offspring of such being typically orcish. However, some one-tenth of orc-human mongrels are sufficiently non-orcish to pass for human.

We will just let that paragraph hang out there back in 1978 and move along. The 5th Edition Player’s Handbook, published by Wizards of the Coast in 2014, has this to say about half orcs:

Orc and human tribes sometimes form alliances, […] When these alliances are sealed by marriages, half-orcs are born.

That all sounds nice and convenient if we just ignore all of human history forever.* It is certainly possible that a romantic pairing could develop between “savage raiders and pillages” and the human settlements they war with, but this would be rare, rarer than what has happened throughout history and continues today, when tribes, countries and cultures go to war.

This never came to mind until I read this Pathfinder Player’s Guide from Curse of the Crimson Throne (by James Jacobs & Mike McArtor).

Many [Humans] live in close proximity to the orcs of Belkzen, resulting in an almost constant state of battle between the two groups. These battles sometimes grow exceedingly personal, resulting in the occasional half-orc. Few of these half-orcs survive to adulthood, and fewer still live among their human cousins…

Here we have a kind of polite acknowledgement of rape as a tool of warfare and oppression, with a hint as to how this can inform a character’s background. When I had to describe the existence of Half-Orcs in my own players guide I wrote the following and threw up my hands in despair:

We play fantasy RPGs with the understanding that the pain and drudgery of medieval life (lice, gum disease, the smell) is grayed-out so we can focus on the adventure. In our games we gleefully butcher tribes of goblins and we don’t care if Guard #3 had a family back home. Murder has been gamified and we’ve all agreed that it’s okay. Rape has been erased, but it lingers in the background.

Dysentery and scurvy have been cured in our modern world. Rape is still an epidemic. In the last few years I have become uncomfortable with how we sanitize human history in our history and mythology, especially when this sanitation engages the same blind spots we employ in the modern world, where very real violence happens every day.

The distillation of History into Game is not a basic equation and this process is driven by underpaid nerds looking to create games that people will have fun playing, bless their hearts. Do designers have a responsibility to grapple with painful and fraught social issues? How would that even be handled given the format?

I don’t have any answers and I’m curious who else is grappling with this topic, but If we care about telling meaningful stories, we cannot ignore the ugliness that has followed us out of our barbaric past and continues to cause harm today.

*The institution of arranged marriage is also highly problematic.

Of all the DnD podcasts out there I don’t think there is one more entertaining or enlightening one that The Adventure Zone.

There’s a lot a player or DM could learn from the show. First and foremost the Brothers McElroy (and their Dad) are setting out to make an entertaining podcast, not podcast their game. This has the benefit of placing story and character first, but might frustrate a listener when the players choose comedic bits over hit points.

The DM starts with the Mines of Phandelver book, but truncates it to skip to the end and launch his own home brew campaign which is in two words: bonkers fun.  The transition is seamless unless you know the original book.

A few things any player or DM can take away from listening:

Anyway who cares what I think you should just go listen.

Previous post Rescue at Bonebridge has been removed BECAUSE OF REASONS.

I don’t know about the other amateur game designers out there do it but I’ve been making maps with the draw tools in Mac Pages. Originally I thought I’d hire a freelance illustrator for the regional and city maps and maybe some character sketches, but as the size of the campaign grew relative to my budget, and I learned more about the world of freelance illustration it became clear that I have three options.

I need to have a map in front of me to be able to create a dungeon, I just can’t picture it any other way. I’m also obsessed with a realistic layouts and worry about things like latrines and proper ventilation.

How can you have a realistic dungeon if you don’t know where the dragon men take their shits?

So I’ve always been making super crappy maps as an outline for each adventure. As I’ve spent more time with Mac Pages and I’ve learned a few tricks I’ve been able to develop map at a level of quality I find acceptable for a free campaign. Here are a couple of examples.

Here is an excavation site in the city sewers where Duergar Sappers are working to bring down the city walls from within. All the line textures are default options with Mac Pages and I pulled the graph paper background from Incompetech.com

Here is the regional map I’m working with. The mountain texture is by somebody called Jirtan on Deviant Art and was a great find. I deleted all the whitespace and put it on a transparent background. The other textures were found just by googling around.

All in all I’d say I spend about 30 to 90 minutes per map, but that could just be because I can’t decide the best location for the breakfast nook.

As anyone who has built an audience from nothing would tell you, become a content creator requires a certain amount of shouting into the darkness until somebody wanders by and finds you.

I’ve made a couple decisions with what I want to do with this campaign i’ve been writing:

I started writing Doom of Ninehands in August of 2014 and am now at the point where the first three fifths of the game can be play tested, but I find myself going back and adding in hooks and clues that relate to the 4th and 5th acts. Call it Checkoff’s Crossbow if you will.

Campaigns have a rhythm and it would be foolish to expect anyone to pick up the threads of this adventure and stutter along as I map the next encounter.

So in the meantime i’ll try to post interesting nuggets of content here, mostly link to people doing interesting things elsewhere, and when I can extract a few pages from my campaign that can stand alone, I’ll put them in the Free Downloads page.

Email me your curses at Shadowoftheaxerpg@gmail.com and follow me on the twitters at @ShadowOfTheAxe